Don’t put yourself last in line: One thing that I’ve learned from male role models is that they don’t hesitate to invest in themselves.” Michelle Obama.
Posted by Beauty Is Diverse at 10/29/2009 05:10:00 p.m. 1 comments

Look of the Day

This year, Glamour is honoring First Lady Michelle Obama with a Special Recognition award for her commitment to mentoring young women. (She also appears on our cover--the first time in Glamour’s 70-year history that a First Lady has ever done so.) You simply cannot talk about 2009 without talking about Mrs. Obama: and no, I don’t mean her status as a style icon (richly deserved though it may be). continue reading here
Posted by Beauty Is Diverse at 10/29/2009 03:15:00 p.m. 2 comments

Akpa le tome gake menya tsi fe vevie nyenyeo. (Ewe)
A fish is in water but does not know the importance of water. (English literal translation)
A fish is the last to acknowledge the existence of water. (English figurative translation)
The Ewe language is spoken in Southeast Ghana, Benin, parts of Southwest Nigeria and Southern Togo. The meaning of this proverb is that a fish is always in the water, but until it comes out of the water it doesn’t even recognize that the water exists. This proverb is about “taking things for granted” and similar to the saying thatfamiliarity brings discontent. This proverb is used to refer to a person who is very close to a powerful person but has lost sense of his or her greatness and starts treating him or her as if they were ordinary people, for example, the children of very rich or politically powerful people.
Posted by Beauty Is Diverse at 10/26/2009 08:40:00 a.m. 2 comments

Ameera, a self-taught chef, has honed her culinary skills over the past 15 years. She began her career in the special events and personal chef business over 7 years ago. In 2006, Tastemakers Events and PR was officially launched and attracts clients from all over. Her culinary and event planning skills produce the most spectacular events and have become Ameera’s trademark. source

The Afro Cuban All Stars return for a sizzling night of hot Cuban rhythms!

June Ambrose (stylist) wearing Alexander McQueen Spring/Summer 2010 Collection. I really love the fabric and the craftsmanship of these garments.
Posted by Beauty Is Diverse at 10/23/2009 05:07:00 p.m. 1 comments

FFAWN created a women's center that offers a broad range of services to Yonkers women of all ages to provide them with a second chance, no matter what cards they've been dealt in life, and to help them lead confident, independent, full, and healthy lives. The Center will also provide a safe haven for women to seek services, engage in beneficial activities and programs, and fell comfortable confronting the changes in their daily lives.

Tracy Moore (born January 6, 1975) is a [[Canadagazine CityLine on Citytv since October 2008. She previously served as news anchor on Citytv Toronto's Breakfast Television from 2005 to 2008.

Growing up in Richmond Hill, Ontario, she went to Langstaff Secondary School. According to host Kevin Frankish, "she spent much of her youth as a Baton Twirler with the Progress Yorkettes in York Region." Moore then earned a BA at McGill University and Masters at the University of Western Ontario.

Moore began her career as a videographer for CBC Television before joining Citytv. source 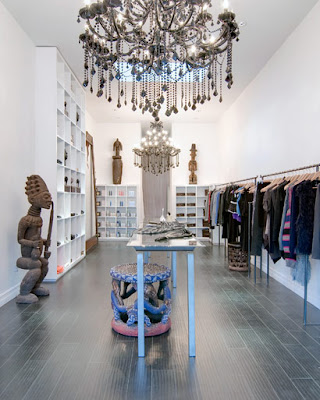 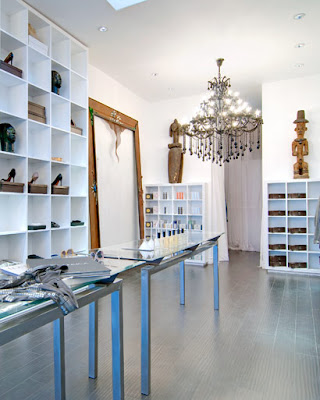 "As the niece of Sierra Leone’s ex-president and the only daughter of the country’s former director of mines, in charge of minerals, diamonds, and gold, Zainab Sumu grew up exceedingly rich. Paris shopping trips, royal dinners, and round-the-clock chaperones were all part of the deal. And yet Zainab, as she likes to be called, has always felt like an outsider. During her private school years in London in the ’80s, she was one of the only African students, doffing her oxfords and blazers for Doc Martens, Chanel jackets, and blond extensions. While at college, when her family was abruptly exiled following a military coup in 1992, a particular fuchsia Thierry Mugler jacket helped her through it. And later, when she moved to New York and found a job at Comme des Garçons, the statuesque Zainab relied on an Afro and her increasingly avant-garde style to hold her own among a tight-knit Japanese team. Fashion always got her through." Continue reading here
Posted by Beauty Is Diverse at 10/22/2009 06:30:00 a.m. 1 comments

"One of our goals was to focus on the importance of educating our kids about healthy eating," said Obama. "
"So many children in this nation are facing health problems that are entirely preventable," said Obama. "We've got our kids who are struggling with things that we have the power to control." Continue reading here
Posted by Beauty Is Diverse at 10/21/2009 06:59:00 p.m. 0 comments

Toronto Fashion week kicked of today , I'll be posting images from the collections through out the week via my Glamtastic Diva Blog. :)
Posted by Beauty Is Diverse at 10/19/2009 09:06:00 p.m. 2 comments

The 6th Annual Keep A Child Alive Black ball took place last night at the Hammerstein Ballroom in New York City.
"Our Black Ball honorees are an incredible group of humanitarians who use their willpower, fame, and courage to save lives devastated by the AIDS pandemic. On October 15, 2009, KCA will have the pleasure of honoring President Bill Clinton for his immeasurable achievements through the William J. Clinton Foundation and The Clinton Global Initiative."source

Thanks to her hit show, "America's Next Top Model," Banks beat out stars likeKatherine Heigl, Eva Longoria Parker and Julia Louis-Dreyfus to make the no. 1 spot on Forbes list of top earning women on prime time.

Banks earns an estimated $30 million from "Top Model," her daytime talk show and various other TV appearances, according to Forbes.com.

If you've ever wished for a handbook that would help you achieve the goals you've been putting off until "some day"...this is the book, and some day is today. This new collection of more than 75 features from the pages of O, The Oprah Magazine gives you powerful insights and practical techniques to help you make your most important dreams come true-creating deeper connections, bolstering confidence, losing weight, gaining financial security, finding balance right in this moment, and much more. Oprah and a team of world-class writers, thinkers, leaders, and artists such as Maria Shriver, George Saunders, Eckhart Tolle, Denzel Washington, Julian Bond, Rita Wilson, and Amy Bloom share wisdom, advice, and encouragement that will help you turn obstacles into challenges and wishful thinking into reality. In each section, you'll find stories that will inspire you and action plans to set you on your path. Click here to pre-order
Posted by Beauty Is Diverse at 10/15/2009 06:00:00 a.m. 2 comments

Monique Péan was raised in Washington D.C. and has traveled the world, visiting more than 30 countries. Monique is thankful that her mother, Gail, solidly encouraged her to pursue her love of art. She credits her inspiration to the art and cultures encountered during her travels to destinations such as Haiti, Bali, Russia, Egypt, Brazil, China, Greece and more. With a Haitian father and American Jewish mother, Monique was no doubt inspired by her own heritage. Continue reading here.
Click here to view her website.
Monique Pean is also a CFDA/Vogue Fashion Fund finalists click here to view
Posted by Beauty Is Diverse at 10/13/2009 05:38:00 p.m. 1 comments

Michael Jackson This Is It

President Obama was awarded the 2009 Nobel Peace Prize on Friday. The first African-American to win the White House, Obama was praised by the Norwegian Nobel Committee for "his extraordinary efforts to strengthen international diplomacy and cooperation between peoples."

"Only very rarely has a person to the same extent as Obama captured the world's attention and given its people hope for a better future," the committee said. "His diplomacy is founded in the concept that those who are to lead the world must do so on the basis of values and attitudes that are shared by the majority of the world's population."

The committee also said Obama has "created a new climate in international politics."

The announcement came as a surprise -- Obama's name had not been mentioned among front-runners -- and the roomful of reporters in Oslo, Norway, gasped when he was named.

In his short time in office, Obama has acted on a wide range of issues from the economy to terrorism and wars in Afghanistan and Iraq. continue reading here

White Patriarchy without all the mess.
Every Black women has power over her own life.
How to tap into your true power.
5th Annual Women of Power Summit (Black Enterprise) Registration.
Posted by Beauty Is Diverse at 10/09/2009 06:00:00 a.m. 0 comments

The Republic of Cuba (pronounced /ˈkjuːbə/; Spanish: República de Cuba, pronounced [reˈpuβlika ðe ˈkuβa] is an island country in the Caribbean. It consists of the island of Cuba, the Isla de la Juventud, and several archipelagos. Havana is the largest city in Cuba and the country's capital. Santiago de Cuba is the second largest city. Cuba is home to over 11 million people and is the most populousinsular nation in the Caribbean. Its people, culture, and customs draw from diverse sources, including the aboriginal Taíno and Ciboney peoples; the period of Spanish colonialism; the introduction of African slaves; and its proximity to the United States.
The name "Cuba" comes from the Taíno language and though the exact meaning is unclear, it may be translated either as "where fertile land is abundant" (cubao), or as "great place" (coabana). Additionally, there is the claim that native inhabitants called the island "Cubagua" in the Columbus era starting in 1542.
According to a 2001 national census which surveyed 11.2 million Cubans, 1.1 million Cubans described themselves as Black, while 2.8 million considered themselves to be "mulatto" or "mestizo". Thus a significant proportion of those living on the island affirm some African ancestry. The matter is further complicated by the fact that a fair number of people still locate their origins in specific African ethnic groups or regions, particularly Yoruba, Igbo and Congo, but also Arará, Carabalí, Mandingo, Fula, Makua, and others. read more info here
Posted by Beauty Is Diverse at 10/08/2009 07:00:00 a.m. 3 comments