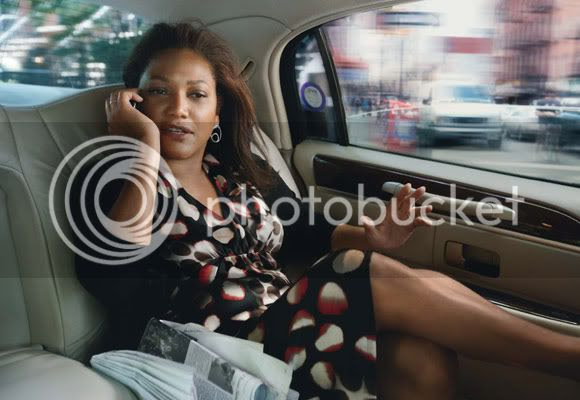 Christina Norman 46yrs, CEO of OWN The Oprah Winfrey Network featured in Vogue August 2010 "Age Issue".
"With nearly two decades of excellence in broadcasting and recognized as one of the industry’s most creative businesswomen, Christina Norman is Chief Executive Officer of OWN: The Oprah Winfrey Network. As CEO, she manages all business and creative areas of the new cable channel and multi-platform media venture designed to entertain, inspire, and empower people to live their best lives. Based in Los Angeles, Ms. Norman reports to the OWN Board of Directors." read more below."

Ms. Norman came to OWN from MTV: Music Television, where she most recently served as President, providing the leadership, strategy and management for MTV, MTV2, mtvU, MTV Tr3s, and MTV.com that kept the youth-oriented brand at the forefront of television entertainment. Prior to serving as President of MTV, she was President of the MTV sister network, VH1, where she garnered widespread industry praise for helming a diverse programming slate and leading the network to its highest viewership levels in 19 years on the air.
Beginning in 2002, Ms. Norman served as Executive Vice President and General Manager of VH1, turning the flagging network’s fortunes and ratings around within the first year with a new identity campaign and aggressive slate of new and successful productions. In 1999, she was named Senior Vice President, Marketing and On-Air Promotion at MTV, adding marketing to the areas she previously oversaw as SVP, On-Air Promotions, a post she held since 1997.
In that capacity, she spearheaded promotion for MTV’s hit series and tent pole events such as the MTV Video Music Awards and MTV Movie Awards. Ms. Norman joined the MTV family in 1991 as Production Manager for the network’s celebrated on air promotions department. She went on to spearhead promotion for other hit series including The Osbournes and 10 Spot, rising through the network’s on-air promotions department ranks.
Ms. Norman has been regularly included in The Hollywood Reporter’s “Power 100 Women in Entertainment.” In 2006, she was named one of Multichannel News’ “Wonder Women,” and has been profiled in Advertising Age’s “Media Mavens” issue. She was named National Public Service winner by the Academy of Television Arts and Sciences in 2002 for MTV’s “Fight for Your Rights: Protect Yourself” campaign.
Ms. Norman serves on the Mount Sinai Adolescent Health Center Advisory Board and the BRIC Arts Media Brooklyn Board.
via{corporate.discovery}
Posted by Beauty Is Diverse at 7/13/2010 10:13:00 p.m.

Christina is truly a trailblazer and I look forward to all of the great things that will be produced by OWN under her leadership. Thanks for the post!